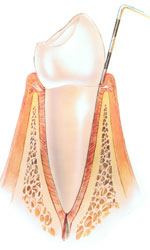 Healthy gums
Periodontitis: The silent epidemic
There is an epidemic which has been going on unrecognised for years, has caused immense suffering and which is largely preventable: gum disease.

The Health Promotion Board conducted a survey that found that the vast majority of people in Singapore suffer from some gum disease. Our own experience is that more than 80% of our patients suffer from gum disease as seen from some degree of gum inflammation. Yet in the same survey most thought they did not have any oral health problem. 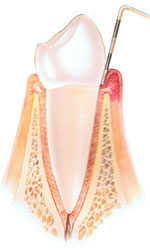 Gingivitis
Why is this so?

Deep down, we all know oral health is important. Virtually everyone brushes their teeth and even indigenous people living in the rain forest clean their mouths and teeth in some way. And the market for oral health products is a multi-billion dollar industry. Some people consider a toothache to be the worse kind of pain imaginable. Some have even claimed it is worse than the pain of childbirth! Most of us are acutely aware when our breath is not fresh or our mouths do not feel clean.

We in the dental profession often refer to gum disease as 'silent', meaning that there are no early symptoms. I think this is not completely true. In our survey, a vast majority of respondents who said that they had no oral health problem also acknowledged that their gums bleed at least occasionally. The trouble is not that there are no symptoms, but that we do not recognize what each symptom means. Often gum bleeding and even pain is passed off as lack of some vitamin, excessive brushing, due to some other illness like diabetes, hormone changes or some sort of imbalance in the body. Anything other than a dental problem. 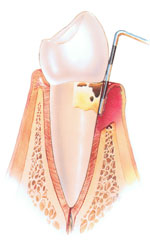 Moderate periodontitis
What is gum disease?

Most people do not think of a bit of inflammation (redness or bleeding) as gum disease. Yet, it is the starting point from which gum recedes, jaw bone and tooth fibers continue to atrophy, the tooth loosens and may fall out.

Bacteria. We all have millions of bacteria and fungi in our mouth. These bacteria form a layer on our teeth, gums and all the other surfaces. This is normal and consistent with health.

When we eat or drink something, especially something rich in sugar, the bacteria multiply and form soft, sticky dental plaque especially on the surfaces of the teeth.

As the plaque mixes with the saliva it gradually hardens to form tartar (also known as dental calculus). Dental calculus can be as hard as bone, so it cannot be removed by brushing or flossing. It requires professional cleaning by a dentist or dental hygienist. It is also porous, rough and attracts even more bacteria.

Tartar/ calculus tends to form in between teeth or at the gum margins of the teeth, because these are the areas which are difficult to clean. Here it irritates the gums, which stimulates inflammatory response. This starts off as a little bit of redness, but gradually if left unchecked it will destroy the bone inside the gums (which, incidentally, holds the teeth in place). The surrounding bone deteriorates.

Certain species of bacteria are more aggressive than others in attacking the gum tissues and there seems to be other (possibly genetic) factors that predispose certain people to be more susceptible to gum disease than others but the vast majority of the population is susceptible to varying degrees to the effects of gum disease.

This process continues until either the tooth is lost or the person realizes something is wrong and seeks treatment.

Advanced periodontitis
What can we do to prevent gum disease?

We've all been taught since childhood to brush our teeth, but most of us are not aware that is equally important to brush the gums also. This is so that we can reduce the amount of bacteria in the mouth, and also clean that all-important gum margin.

The other very important step we can take is to clean in between the teeth using floss, interdental brushes or by some other method. This is crucial, because no amount of brushing can effectively clean the interdental spaces (the spaces between the teeth). There are many people who brush their teeth immaculately, avoid sugary food and drinks, and otherwise practice a lifestyle completely consistent with perfect oral health, but still get tartar between their teeth because of lack of flossing.

So if I do all that does that mean I never need to see a dentist?

Bacteria are in our mouth multiplying 24/7, and it is rare for a person to be able to totally remove plaque from the teeth completely every single time. Tartar hardens in as little as 2 days, and when it does it is no longer possible to clean it off. You will still be able to clean off new plaque that settles on that tartar, so brushing and flossing well slows down tartar formation a great deal, but it does gradually build up.

Tartar needs to be removed, and your dentist does this by scaling the teeth.

So if you experience bleeding gums, redness of the gums or discolouration of the teeth, or if you experience pain in the area of the mouth, do yourself a favour: see a dentist. Have a scaling done twice a year and have a thorough oral health check-up done at least once a year. By this, I mean a thorough dental examination, usually accompanied by a few dental x-rays. This is still very seldom practised in Singapore, although it is the norm in most developed countries.
If my gums are healthy does that mean they will never recede?

If your gums are healthy all the time, gum recession is minimized but not completely eliminated. Some studies have shown that, on average, our gums will recede 2-3mm over the course of our lifetime even if perfectly healthy. This is normal and in part is due to the teeth erupting slightly to compensate for the wearing down of the chewing surfaces over time. We also tend to lose some bone mass as we get older and this is reflected in a reduction in the bone mass around our teeth, also contributing to the tendency for the gums to recede.

This is, of course, a very small amount compared to the amount of recession and gum destruction that will occur during active gum disease, especially periodontitis. It can still lead to some root surface exposure later in life and consequently teeth sensitivity.
Normal Hours : Monday to Friday 9am to 7pm, Saturday 9am to 6pm